A short clause that perfectly showcases my vision of the Romanian language as an alloy: the first word is of Turkic origin, the second comes from Latin and the third is Slavic. In a single… not even sentence – clause.
And you see the same melting pot in their culture, food and architecture throughout the country. Especially in architecture

“I’m brave! I WILL actually open those Romanian books” – thought Alex suspecting no evil. “So what if you don’t know the language? What problems can pose another Romance one, with 20% of words of Slavic origin? Phah.”

And then she hit the very first words, in the title of the story, as on the pic. Bordel de merde, how do you read Elvish characters? Let’s check out the contents page. “D-l Goe”, ok, much clearer, thanks. Come on, Romania, what kind of word is this? 😀 That’s not fair! 😀 We, the French, are not easily confused. This obvious construction must be something like “de le”, and the story is “du Goe” – people always do this to pronouns, articles and prepositions. But later on the combination appears as a subject of a sentence -> must be a noun -> must be a short form of “domnul” (which turned out to be right) -> Mr. Goe. Seems like I forgot простейшие вещи, г-да. 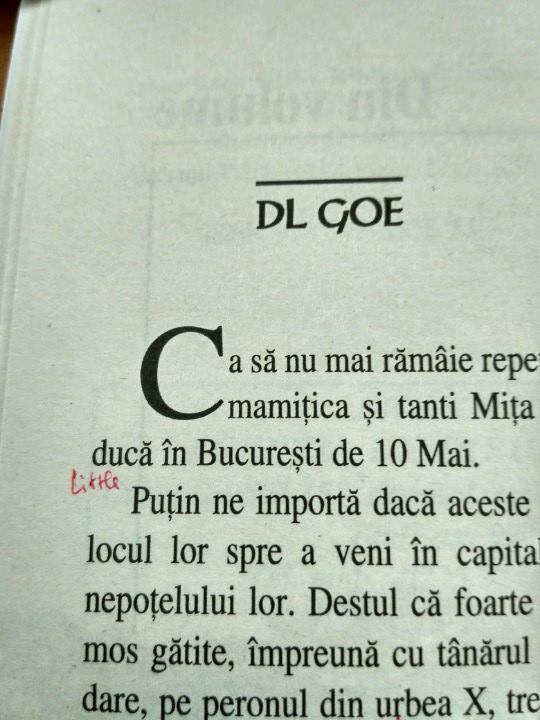 Besides this little bastard, on the next three pages you find things like d-ta, n-are, l-ar, c-a, şi-l, i-a, să-l, whatever they mean 🙂 It is soothing to know there are languages nearby that think a couple of hyphened letters is a word alright – just like it calms you to know there still are people who suck in their spaghetti instead of using a spoon. And that’s nice, you don’t just love a language for it’s ă, â, ț and î 🙂 Gonna be fun 🙂